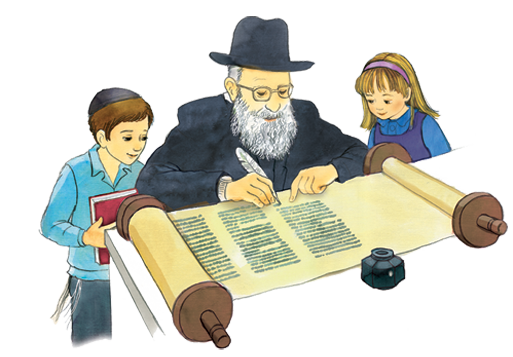 An authentic Torah scroll is a mind-boggling masterpiece of labor and skill. The parchment is cured, tanned, scraped and prepared according to exacting Torah law specifications. Comprising between 62 and 84 sheets of parchment and containing exactly 304,805 letters, the resulting handwritten scroll takes many months to complete. An expert pious scribe carefully inks each letter with a feather quill, under the intricate calligraphic guidelines of Ktav Ashurit (Ashurite Script). The sheets of parchment are then sewn together with sinews to form one long scroll. While most Torah scrolls stand around two feet in height and weigh 20-25 pounds, some are large and quite heavy, while others are small and lightweight.

Only black ink is acceptable. Ink of any other color is not kosher for a Torah scroll.

In ancient times, the ink used for writing a Torah scroll was obtained by boiling oils, tar and wax, and collecting the vapors. Afterwards, that mixture would be combined with tree sap and honey, and then dried out and stored. Before its use, it would be mixed with gall-nut juice.

The scribe writes with a feather pen or reed pen, filling its tip from the ink. An iron pen is not proper for two reasons:

1. It may puncture the parchment.

2. Iron is often used to make weapons of death and destruction, both of which oppose the intent of the Torah.

The letters of a Torah scroll are written in the "Assyrian" script; the various scripts or fonts in which Hebrew is commonly written or printed are not valid. The lines must be perfectly straight and even. Numerous laws detail the precise figure of each letter, and if even one letter is missing, or in some instances, merely cracked or smudged, the entire Torah scroll is not kosher. A printed Torah scroll, even if its letters conform to the required form, is not valid.

Because the Torah scroll embodies the holiness of its message, it should focus exclusively on its pure text; any illustrations or artistic decorations are forbidden.

To become a scribe requires rigorous study and training-and great skill. Certainly, a person who has not carefully studied the laws pertaining to composing a Torah scroll cannot be a scribe. Above all, however, the scribe must be a G‑d-fearing and pious person, dedicated to the sanctity of the Torah scroll.

The Torah scroll, and especially the Names of G‑d contained therein, must be written with utmost purity and devotion. It is therefore customary that the scribe immerse himself in a Mikvah (ritual pool) before beginning his work. He also recites a blessing at the outset of his work and before each time he writes the Name of G‑d.

The atzei chayim are the two wooden shafts attached to either end of the Torah scroll, around which it is rolled. Each shaft is made long enough to extend beyond the top and bottom of the scroll, and is used as a handle with which to hold the Torah scroll and to scroll from portion to portion.

A valuable treasure is not left exposed and vulnerable. We cover the Torah scroll with multiple coverings, dressing it in a "cloak" before restoring it to its honorable place in the Ark and drawing the curtain. The mantel is an ornate covering that both protects and beautifies the Torah scroll, typically made of velvet and embroidered with golden thread, silk, and ornamental beads.

The Torah is our most precious possession and we lovingly display that. We adorn it with a crown, typically silver, as a symbol of our endearment and veneration. The keter rests on the wooden shafts, which extend above the scroll.

The yad is the pointer that the reader of the Torah uses to help others follow the written words as he reads. Usually made of silver, the end of this rod is commonly shaped like a hand with its index finger extended. A chain attached to its other end can be used to drape it over the Torah scroll when put away.